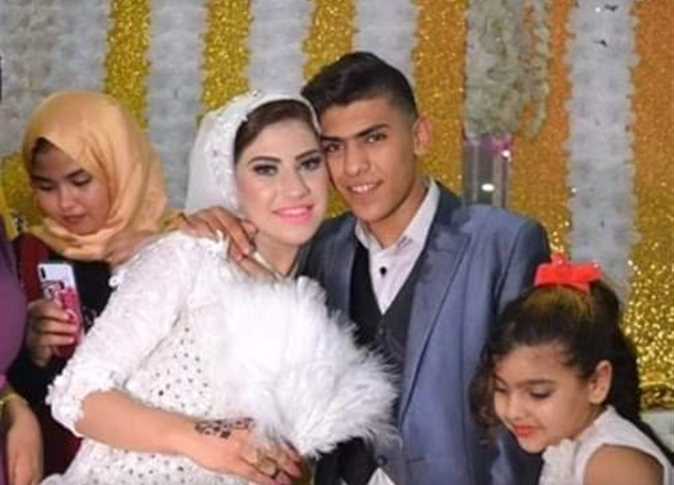 The bride of the dead Menoufia
In a house in the old market area of ​​Al-Bagour in Monofiya, the family of Adil Al-Aqra, 58, lives in the school of the father of the bride of Monofia, who was killed by her husband 24 hours after the wedding, where her family found her slaughtered inside the marital apartment on the morning night.
Tears and screams rise in the simple house after he was filled with joy and joy to marry their daughter, but quickly turned to the yelling and crying after the discovery of the bride's death.
At first, the bride's father told Al-Masry Al-Youm on Monday that his daughter had a diploma and was working to help her six brothers. She was engaged three years ago and was happy and happy with the bridegroom, and we prepared her before the book. "I do not know what happened."
The father of the bride said that he received a call from his son telling him that he found his sister slaughtered inside the marital home when he went to check on her after contacting her mother and asking her to attend her brother and her sister with some things of their own on the morning night in the village of Kafr al-Qarnain.
"His daughter is 18 years old, and during the engagement period, her fiancé did not have any signs of psychological illness," said Ould El-Arous, who died. "We were in a state of emergency and we received the last call from her at 12 noon and she was fine, And her brother went to her ».
He added that his brother, the bride that he went to his sister and her husband opened the door, pointing out that he was holding a knife and clothes stained with blood, asked him: «Do you slaughter the chickens in the morning .. Vapsm and said uh .. Enter .. A higher ladder and closed the door and fled», The groom escaped intact, but he was injured, while he tried to catch up with him, but without interest, pointing out that he moved his sister to the hospital, but she died.
The brother of the bride said that the forensic report confirmed that his sister is a virgin, which she confirmed before her death in a telephone conversation with her sister and her mother, while the bride's family demanded the right of her daughter and to reveal the reason for her husband doing so, refusing to receive the duty of consolation in them until the punishment of the offender .
On the other hand, the husband who is accused of killing his bride on the night of their wedding at Banha University Hospital is still under observation. He arrived at the hospital with a stab wound in his abdomen and was placed under guard in cooperation with the police forces of Qalioubia Security Directorate.
Al-Bajour's office heard the father of the bride and her brother, who confirmed in the investigation that the husband escaped intact, and there is no stab as he claims to exchange the stabs and wounding him by his wife after a dispute between them.
Maj. Gen. Muhammad Naji, Director of Security of Menoufia, received a notification from Maj. Ahmed Ghobashi, head of the Al-Bagour Investigation Department, of receiving a notification from Al-Bagour General Hospital by receiving Manar, 19, a dead corpse sustained by a deep wound in the neck.
By Michael - July 31, 2019
Email ThisBlogThis!Share to TwitterShare to FacebookShare to Pinterest