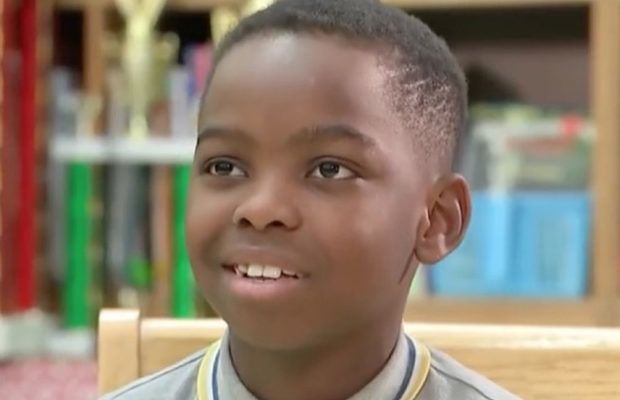 Sometimes, in this world, champions emerge from the most humble of places. There are a number of idioms that speak to this concept, that reference the unbridled potential of even the most unassuming human beings. Rarely though, do we get the privilege to see such stories actually take shape in reality.

This tale begins in Nigeria, a country whose people are suffering for a number of reasons. It begins with a young boy who dreams of something he has no frame of reference for yet and the great destiny that waits patiently beneath his trembling fingertips…
Nigerian Refugee 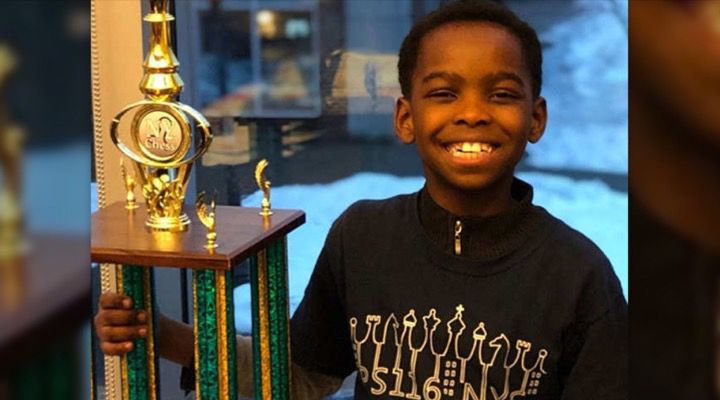 Nigerian refugee Tanitoluwa Adewumi, recently received a rather impressive honor in the new country that he and his family had made their home. The budding chess expert, new as it seemed he was to the game, took first place in the New York State Scholastic Championships tournament at the beginning of 2019. An amazing achievement made even more amazing by the fact that Tanitoluwa is only 8 years old.
The Game 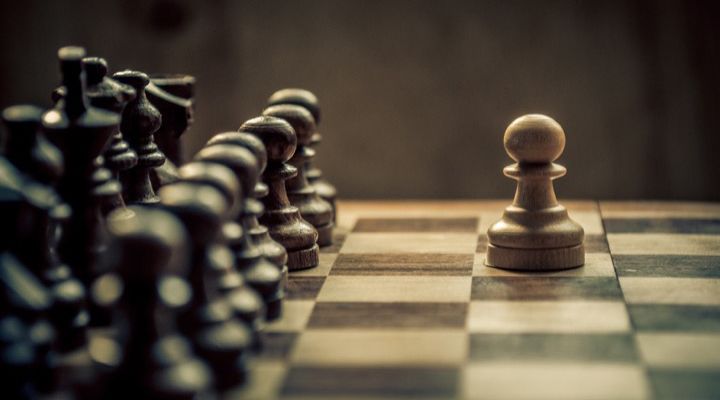 For those who aren’t aware, chess is a two-player strategy board game that is simple in its rules but complex in its gameplay, so complex that the knack of the game has eluded many would-be champions over the years. The modern form has been played as far back as the 15th century, but strategy games like it go back to ancient China…
Capture and Attack

The game is typically played on an 8 X 8 square board with alternating colored tiles and works as follows, your pieces are used to attack and capture your opponent’s pieces while supporting each other. That is the simplest explanation of the rules, but the pieces all have different styles of moving and attacking and the strategy is very complex. It’s not a game that’s easy to win, but Tanitoluwa’s life has never been easy.
Not Easy

Tanitoluwa Adewumi, or Tani as his parents call him, hasn’t led the easiest life. In 2017, Tani’s Christian family was forced to leave their home in northern Nigeria for fear of attacks by the Boko Haram terrorist organization. Boko Haram is a jihadist terrorist organization, like Hezbollah, and ISIS and has been active in the region for decades. If Tani’s family wanted to live, they had to flee…
A Year In 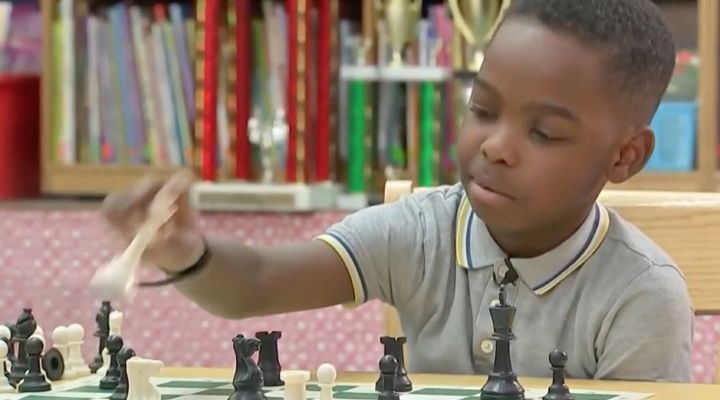 Tani’s family made it out safely and resettled in New York City, but the transition was not easy. Immigration law in the United States has grown more complex over the years and even today, it’s not easy for a family to make their way in the so-called “New World.” Still, a year after they moved, Tami began to thrive; even while his family lived in a New York homeless shelter.
Learning the Ropes 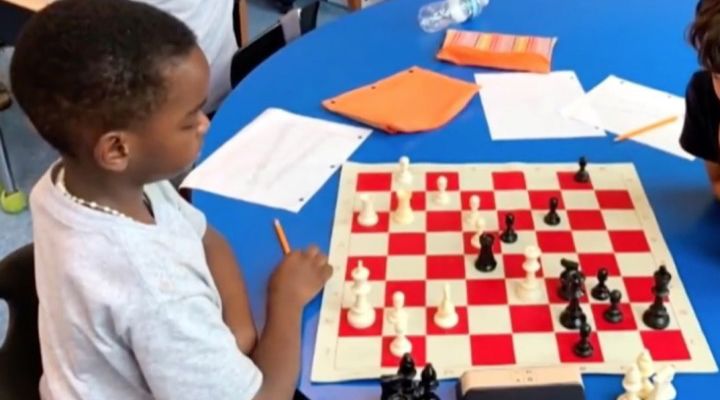 Tani took up chess in 2018 and despite his young age, he seemed to be a natural at the game. He played at the homeless shelter at first, learning the ropes and the complex ins and outs of strategy. When he attended school, he began learning under a part-time chess instructor who helped him really up his game. Soon, he begged his mother to let him join the school’s chess club…
Coaching Expertise 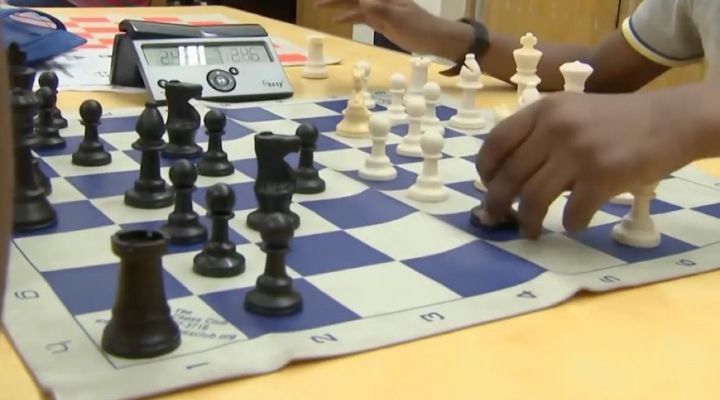 At first, Tani’s mother was reticent. She worried that there would be a cost associated with joining the club officially, something the Adewumis obviously couldn’t afford. Still, she couldn’t stop him from playing with his friends at school, especially since he was clearly so talented at it. As soon as School chess coach Shawn Martinez saw how brilliant Tani was, he knew he wanted him on the team.
Needing Help

Though Coach Martinez wasn’t entirely sure of Tani’s situation, he knew some of the boy’s story and decided to reach out to the boy’s family. When he learned that they were unable to pay the costs associated with chess club membership, he reached out to Russell Makofsky, the man who oversees Manhattan’s P.S. 116 chess program…
Waiving Fees 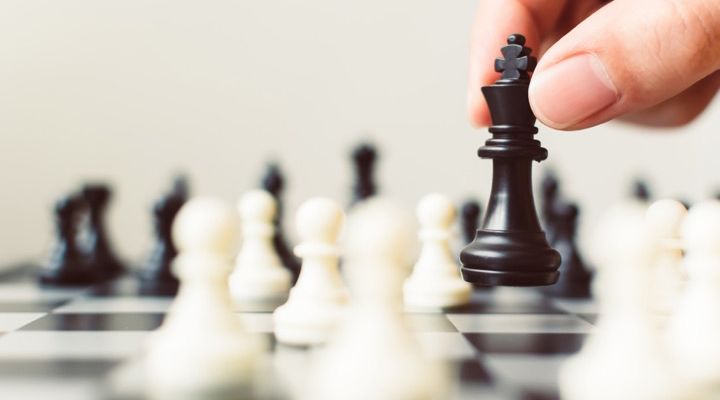 Makofsky considered Martinez’s assessment of Tani’s talent and decided to waive all chess club membership fees. Considering those fees can easily exceed thousands with the cost of travel and chess camp admissions, this was a pretty big deal. It meant that Tani was more than just your run-of-the-mill student. He was something special.
Special Gift

Tani’s fellow students saw this too and one of his fellow chess players even gave him a brand new chess clock as sort of a welcome gift for joining the team. Tani’s mother and father had known about their son’s talent, but they had no idea that he was as good as all these folks seemed to believe he was. After that, they strove to do whatever they could to foster this newfound skill…
Parental Support

Tani’s mother began taking him down to Harlem for regular three-hour practice sessions. His father, an Uber driver and a recently licensed real estate salesman, lets him use his laptop to play chess online nearly every night. Hsu Adewumi told the New York Times that his son was “An inspiring example of how life’s challenges do not define a person.”
Undefeated 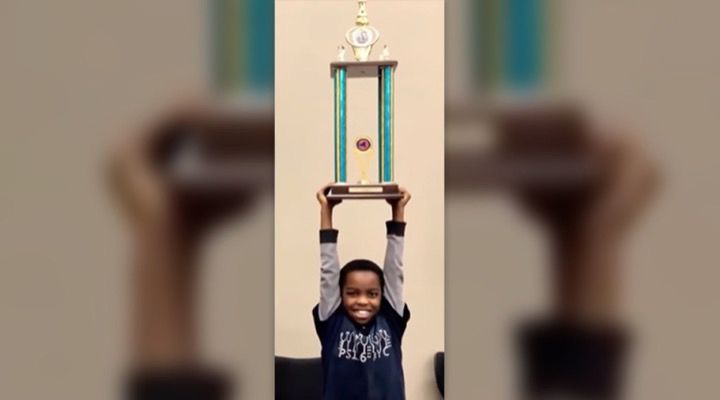 With each hour of practice, Tani continued to improve. Eventually, the elementary school student found his way to New York State Scholastic Championships tournament and went undefeated throughout the event. He beat out players from elite private schools and students who had private chess tutors, eventually claiming a total victory for his age bracket. His parents were overjoyed, as was Tani himself…
The Youngest Before 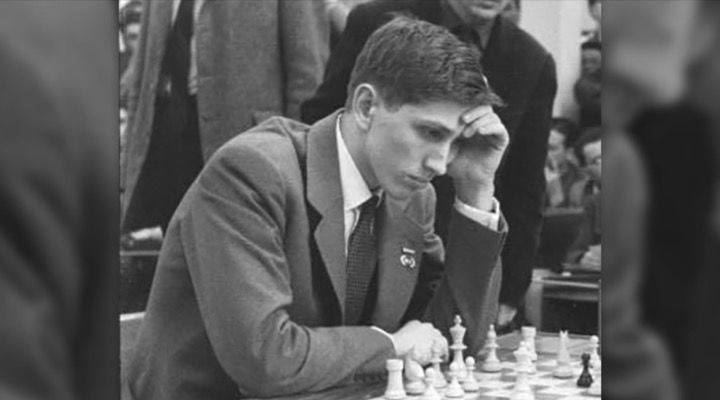 Tani’s victory has reminded people of another famous and very young chess champion; Bobby Fischer. Fischer won the so-called “Game of the Century” when he was only 13 years old, became American champion at 14, and at the time, became the youngest Grandmaster at the age of 15. He also has the only perfect score in the history of the US Championship.
Big Dreams

Eight-year-old Tani has similarly big dreams for his future. “I want to be the youngest grandmaster,” he expressed in a recent New York Times interview. Even the previous, youngest grandmaster, Sergey Karjakin of Ukraine, was only 12 years old when he gained the title back in 1990. Frankly, he’s proven he’s capable of it…
Trophy Kid

Tani has already taken home seven trophies from a number of chess tournaments and both his parents and his principal, attribute this accomplishment to not just Tani’s prodigious skill, but his very supportive parents. His coach, Shawn Martinez, estimates that Tani could achieve master status in a year or two.
Hard Working

“He works very hard at his game,” Martinez said, during an interview. “He is so driven. He does 10 times more chess puzzles than the average kid. He just wants to be better.” As expected, Tani’s remarkable story has hit national headlines and has inspired many across the country, especially parents…
Inspiring Story 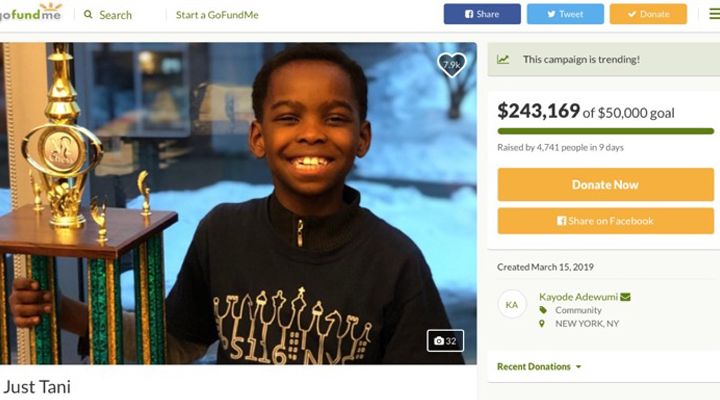 Many of those people have been moved to help Tani and his family in any way they can. Makofsky even set up a GoFundMe to this effect, which has been incredibly successful, raising over $100,000 in just two days. Tani’s family has received offers for a car, legal services, jobs, and even housing.
Hope for a Home 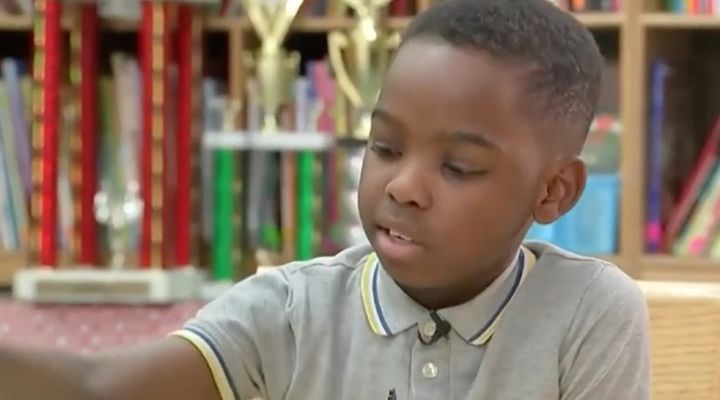 Makofsky’s hope is that the GoFundMe will allow the Adewumis to eventually have a home of their own soon. “Tani is rich beyond measure,” he explains. “One year to get to this level, to climb a mountain and be the best of the best, without family resources…I’ve never seen it.” Neither had a lot of people, including one very interesting political figure…
Impressing a President

Tani’s story even captured the attention of one of the United States former Presidents. Bill Clinton invited the boy and his family to his offices in Harlem so that he could meet with them. “This story made me smile, Tanitoluwa, you exemplify a winning spirit – in chess and in life. And kudos to your hardworking parents. You all should stop by my office in Harlem; I’d love to meet you.” Clinton wrote on his Twitter.
Land of Opportunity 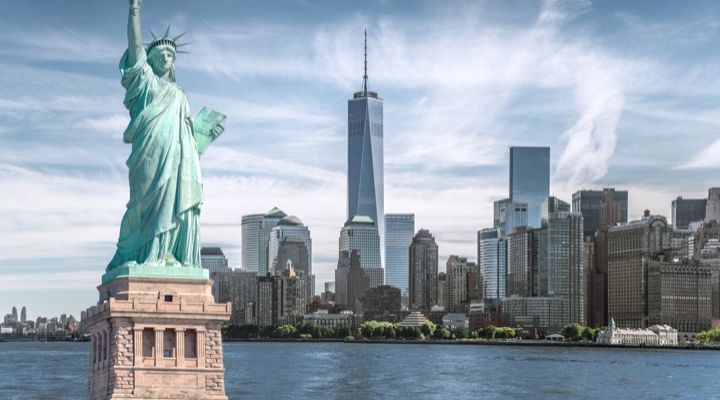 In the meantime, Tani’s family is simply relishing in the incredible opportunities that their son has been able to experience since they arrived in New York, a place that his father calls, “The greatest city in the world.” Tani has certainly come a long way, but he still has a very long way to go, and we’ve no doubt his skills will take him there.