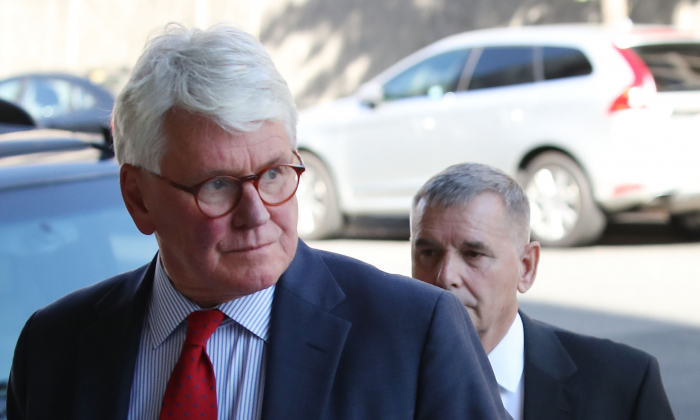 Attorney Greg Craig (L) arrives at US District Court in Washington on Oct. 17, 2016. (Mark Wilson/Getty Images)
By Ivan Pentchoukov
April 11, 2019 Updated: April 12, 2019
Federal prosecutors in Washington indicted former Obama White House counsel Greg Craig on April 11, accusing him of making false statements in connection to his foreign lobbying work in Ukraine.
Prosecutors say Craig lied to both his law firm and government investigators about the extent and nature of his contacts with the media in connection to a report he prepared on Ukraine.
The prosecutors allege Craig knowingly perpetrated the scheme in order to avoid registering as a foreign agent, which would undermine the perception of independence of both the report and Craig and “impair the ability of Craig and others at the law firm to later return to government positions.”
“Mr. Craig is not guilty of any charge and the government’s stubborn insistence on prosecuting Mr. Craig is a misguided abuse of prosecutorial discretion,” the attorneys, William Taylor and William Murphy, said in a statement on April 10, the day before their client was indicted.
Craig, 74, faces a five-year sentence for each of the two charges. The prominent Washington attorney has long been rumored to be the subject of a federal investigation resulting from the probe by special counsel Robert Mueller.
The special counsel has already successfully prosecuted a case connected to the Ukraine report at the center of Craig’s case. Alex van der Zwaan, a Belgian-born Dutch national, was sentenced to 30 days in prison in April 2018 for lying about his work related to the report.
Craig’s former law firm has already paid more than $4.6 million and acknowledged that it failed to register as a foreign agent for Ukraine. The civil settlement with the firm, Skadden, Arps, Slate, Meagher & Flom LLP, laid much of the blame for the violations on Craig.
According to the indictment (pdf), Ukraine engaged Craig and Skadden in 2012 to prepare a report about the trial, conviction, and sentencing of Yulia Tymoshenko, which has been perceived by Western government and media as unfair and politically motivated. Ukraine sought the report as part of a lobbying campaign to improve its international image.
Craig was aware of the registration requirements under the Foreign Agents Registration Act but didn’t want to register, the prosecutors say. Registering “would have required Craig to disclose that a third party had paid the law firm more than $4 million for the report and that the law firm had a parallel engagement with Ukraine to assist in the prosecution of Tymoshenko on additional charges,” the indictment stated.
The $4 million was paid by a private Ukrainian citizen whose identity Craig and his colleague concealed, and instead drafted false, backdated invoices showing that the funds came from the Ukrainian government.
The probe into Craig comes as the Justice Department is reportedly cracking down on violations of the Foreign Agents Registration Act, a decades-old law meant to allow Americans to know when foreign entities are trying to influence public opinion or policymakers.
Veteran political operative Paul Manafort was sentenced in March to 7 1/2 years in prison for illicit foreign lobbying and other as part of Mueller’s Russia investigation.
Mueller concluded his investigation in March, finding that neither President Donald Trump nor anyone in his campaign colluded with Russia. Attorney General William Barr is expected to release Mueller’s final report within a week.
Craig was the first White House counsel to former President Barack Obama. In private practice, his clients have included former North Carolina Sen. John Edwards and James Cartwright, former vice chairman of the Joint Chiefs of Staff, who was investigated and charged for leaking classified information.
Reuters contributed to this report.
Follow Ivan on Twitter: @ivanpentchoukov

The very fabric of America is under attack ...