Briana Rawlings was on cloud nine when she learned that she would soon bring a new life into the world. But 17 weeks into her pregnancy, Briana received devastating news. The young mother to be was diagnosed with an aggressive form of cancer in the blood known as NK cell leukemia.
The young woman was not far from the midpoint of her pregnancy when she was faced with the dilemma of deciding between the life of her child and the protection of her own health.
Briana chose to forego the treatment that could possibly save her life. She would instead continue with the pregnancy in hopes of providing her unborn baby with the opportunity to live a healthy life. The sad reality of the situation is that both mother and son would lose their life. However, some comfort can be taken from the fact that Briana was able to hold her baby boy and shower him with the love she possessed for him.

Brianna named her son Kyden and though the little boy lived only 12 days, he received enough love for a lifetime. It's hard to fight back tears while watching a weakened Brianna cradle the tiny infant in her arms. The love in her eyes when looking at Kyden is something you will never forget.
Brianna acted like a mother even before her son was born. She was even willing to trade her own life for the life of her child in order to give him a chance at life. In the end, her decision brought more pain to her as she would also have to suffer the pain of losing Kyden. However, Briana was not broken by the loss. In fact, losing Kyden caused her to renew her own fight to survive cancer.
Brianna promised Kyden she would fight to live. She finally lost her battle with the deadly disease on December 29. She died four days after her 19th birthday. Brianna's courage and the love she had for her son were a great source of inspiration for her family. The loss of the young mother and her child has devastated them.
Brianna's sister, Kourt, admits she cannot think about her sister without breaking down under the weight of the emotion.
The complications for Kyden began three months before he was due. Brianna contracted a blood infection that doctors feared could be passed on to her unborn son. Doctors decided to deliver the baby immediately through a C-section.
Kyden was endowed with the same fighting spirit that fueled his mother. He came into the world screaming and was able to fill his lungs with air long before it should have been possible. For Brianna, the 12 days she spent with Kyden were the best days of her entire life. 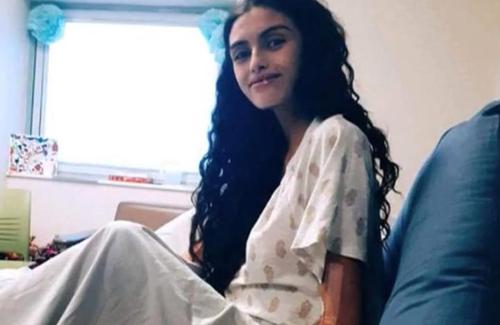 Save
Brianna endured pain and sickness to become a mother. It was always her dream to have a family. Once her son was gone, he still provided his mother with the strength to continue her fight. Brianna believed that she would win her fight against cancer and felt like her health was better than it had been in a long time.
For a while, it seemed as if Brianna might win her fight against the disease. There was a marked improvement in her blood levels and she was working hard to regain the strength that would allow her to use her legs again. She even grew strong enough to take day trips away from the hospital.
Despite the spirit and fight Briana showed, her condition eventually took a turn for the worst. Doctors decided against a bone marrow transplant they considered for Briana. Instead, they opted to treat her condition with a new drug still in the trial phase.
Doctors believed the drug would succeed in saving Briana's life but the cost was a staggering $1000 a week. Brianna's family went to work at raising the needed money for the treatment so that she could receive uninterrupted treatment. Unfortunately, Brianna only received two doses of the medicine before she succumbed to her illness.

Brianna Rawlings did not get to spend much time on earth. However, she provided a unique light to the world for the time she was granted. Brianna taught those who were fortunate enough to watch her journey that strength could be found in courage. She also taught them that hope can be maintained even in the darkest of times.
What do you think about Brianna's choice of saving her unborn baby's life instead of getting cancer treatment? Would you have done the same? Let us know in the comments and be sure to spread Brianna's story – her courage will be an inspiration to others!