When you are a mother you can usually count on being pulled a million ways at once. You probably feel as though you are continuously picking up after your kids, doing endless loads of laundry, and making meals for hours (that they just pick at!)
There are many days you probably just wish you could lock yourself away for even just a few minutes. 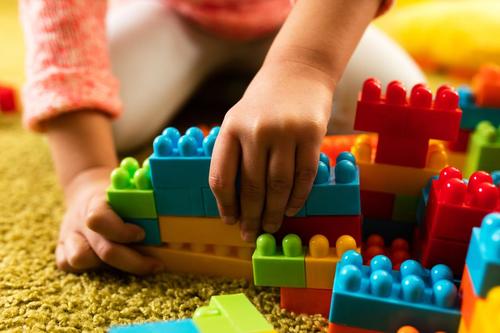 Heather Duckworth is a devoted mother who understands the challenges of motherhood all too well. However, she has a story to tell that means the world to her. She hopes that by telling her story other mothers will find joy in the many messy situations they will inevitably find themselves in as their kids grow up.
A Facebook post titled “The Blue Stain” was based after a personal story of hers. It started out concerning the yucky pile of sticky slime her daughter had accidentally let fall to the floor. As she was cleaning it up, she remembered something else.

It was fourteen years ago and Heather was getting a 4-year-old and 2-year-old triplets to bed. Her entire life was a whirlwind of meals, diapers, naps, toys, baths, messes, and so much more.
Heather had the kids pick up toys before bedtime. They were singing and dancing as they cleaned up, which was something she encouraged them to do to make the chore a little easier.
That is when Heather saw the big blue stain on her carpet.
One of her triplets had been holding a pen that exploded. Ink had gone all over his pajamas, his body, and the carpet. She was instantly upset and took him to the bathroom to try and clean it off while her husband tried to clean the carpet.
She admitted that she was mad, upset, and frustrated at the time. She says she was not upset at her son for making the mess. Instead, she was mad at herself for leaving the pen where the little boy could find it. She said that her relatively new carpet now had a blue stain that wouldn’t come out, no matter how hard she and her husband scrubbed it.

Just a month after the accident, her same little boy was diagnosed with cancer. In just two short years, he had passed away.
However, the blue ink stain was still there.
Heather wants to remind everyone that yes, life can be messy. The blue stain bothered her every time she walked by it, but she knows that in the grand scheme of things it wasn’t important.
While the stain never did come out, even with professional cleaning, Heather said it reminds her that it is okay when accidents happen. When she sees it, it takes her breath away to remember the little boy she lost.
Heather wants everyone to remember that messes happen. They aren’t worth getting upset over, as there are much more important issues in life.

What did you think of this beautiful story? We hope it touches your heart! Leave a comment and pass this on to the stressed parents you know!

sourece:https://www.apost.com
By Michael - October 15, 2018
Email ThisBlogThis!Share to TwitterShare to FacebookShare to Pinterest