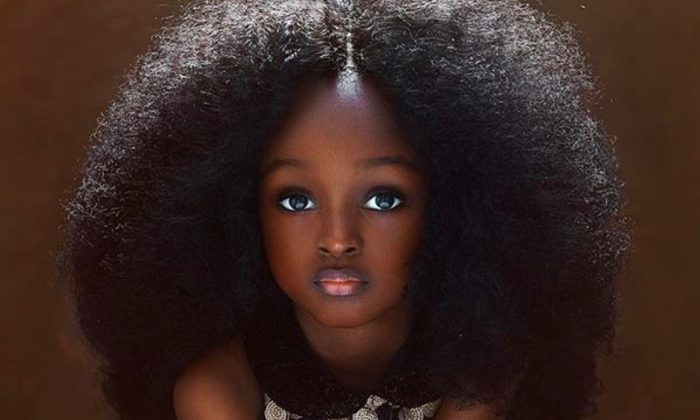 Is this the most beautiful girl in the world? Many of her fans think so, describing her as “an angel,” “absolutely stunning,” and “doll-like” on Instagram. This young girl has since accumulated thousands of adoring fans. Six-year-old Jare, from Nigeria, first hit the spotlight in 2018 when photos of her and her two sisters went viral on the internet.

Wedding photographer Mofe Bamuyiwa, from Lagos, Nigeria, posted a series of photos of 5-year-old Jare on her site, who then received thousands of likes and comments on her striking beauty.
“I could have made her smile and make her laugh out loud but I put her in their natural moments for us to see through their eyes!” Mofe captioned on one of her images.
“All I want is for everyone to see Jare’s powerful potential. … I want the photo to speak to her when she has reached her adulthood,” said Bamuyiwa to Yahoo Lifestyle.
Bamuyiwa taught herself photography where she focused on capturing the beauty of people in Africa and Nigeria. “Most times I look for the weakness and make it strong and inspirational,” she said in an interview with Bored Panda.

“I am very surprised because I have handled a camera for many years and I never saw this coming too soon to me and I’m eternally grateful and willing to do more and better.”
The pictures of Jare have received tens of thousands of likes, with hundreds of comments on Jare’s incredible natural beauty. “Oh, yes, she’s human! She’s also an angel!” wrote Bamuyiwa.

Jare is now a model whose future looks bright. Her two sisters Jomi, 7, and Joba, 10, have also come under the photographer’s lens and will most likely have a promising career in the modeling industry.

An Instagram page, called The J3 Sisters, was set up by the trio’s mother and has garnered 128,000 followers.
One admirer said: ”Beautiful! Stay sweet and innocent the way you are. Don’t let the popularity go to your head. Natural beauties!”

The trio are modeling with Princess Ford Haute Couture—a luxury fashion brand for young girls. The brand aims to create “memorable pieces that would make girls feel special … turning heads wherever they go to—everything a little girl and her mom could ever want!” the website says.
Other child models have been big on social media. Seventeen-year-old Thylane Blondeau, from France, was called “the most beautiful girl in the world” when her photos were published in a Vogue Paris supplement called Vogue Enfants. Blondeau was 6 years old when she hit fame only two years after she began modeling. In 2017, at age 16, she became L’Oréal’s latest brand ambassador. She was again given top mention in 2018, in a video called The 100 Most Beautiful Faces of 2018.

Will Jare end up with the title of  “the most beautiful girl in the world?” Whatever her future has in store for her, let’s hope she keeps a firm grip on reality, and having looks that are to die for can help others reach their potential—be it beauty, brains or helping others—one of the many other ways humans can leave a good imprint.
By Michael - March 18, 2019
Email ThisBlogThis!Share to TwitterShare to FacebookShare to Pinterest
Labels: fashion, Models