12 Things Parents Should Never Do For Their Children

12 Things parents should not do for their kids 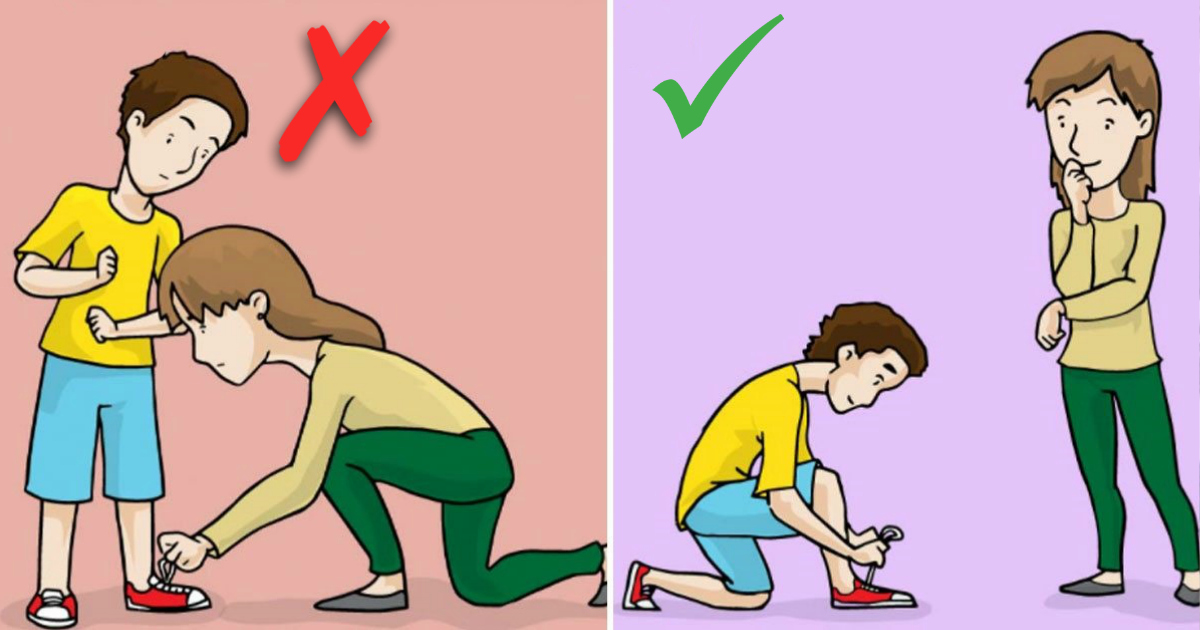 A kid isn’t a robot that can be made to eat, walk, talk, and behave with a remote. But all the same, parents in their enthusiasm and zeal for doing the right thing and being a good parent end up trying to control their kids a bit too much making several parenting mistakes that may have been considered right in earlier days. Without knowing, you could be hurting your child or breaking his confidence or even making him feel insecure. There are many parents whose behavior could also create a sense of mistrust and insecurity in children. Here are 11 things that parents shouldn’t do for kids.

1 Speaking for your kids

When you talk for your kids, it limits their ability to think spontaneously and come up with answers relevant to the questions asked of them. Moreover if children aren’t allowed to speak for themselves, they end up copying your personality, behavior, and style of communication using your exact same response and words. Children need to think and speak for themselves to help them develop their own personalities and character. It’s ok to drop hints now and then when they may fumble for words but always speaking for them is a big No NO. 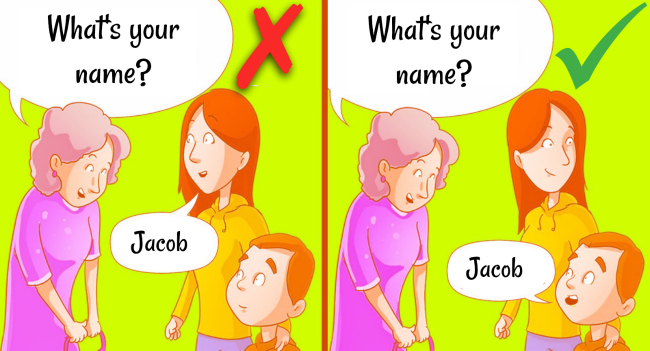 
2You don’t need to be friends with them

There are several parents who think that to get along with a child you need to be friends to gain their trust. This is a huge mistake because what you don’t know is this! In spite of times when you feel your child isn’t listening to you or not communicating much, it doesn’t mean you are a nonexistent entity in their lives. A parent is a child’s biggest pillar of security and you as a parent are usual the first person a child learns to trust.
Parents need to be parents and they are there to protect kids. If you constantly worry about whether your kid likes you or not, then perhaps you are confused in your roles. Kids receive their security from a figure of authority which is you. The same emotional feelings cannot be given by a friend. Moreover, once you become a friend. How on earth will you discipline your child when the need arises? They won’t take you seriously. 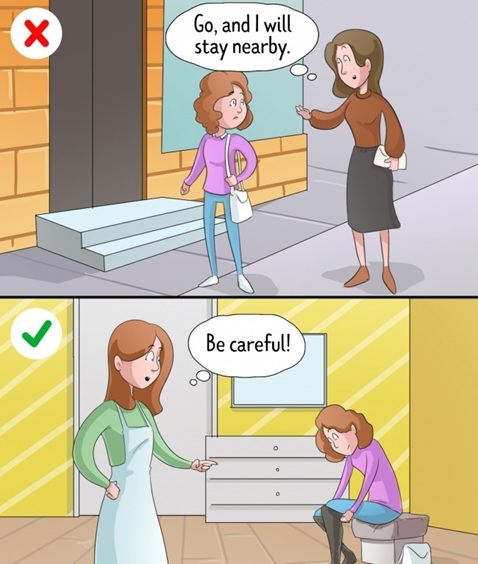 This is a problematic issue where many parents make a classic mistake. When a child wants something, many parents will not oblige saying that the child doesn’t need it. This again confuses the child which has just got the message that their needs and desires aren’t important and necessary to have. 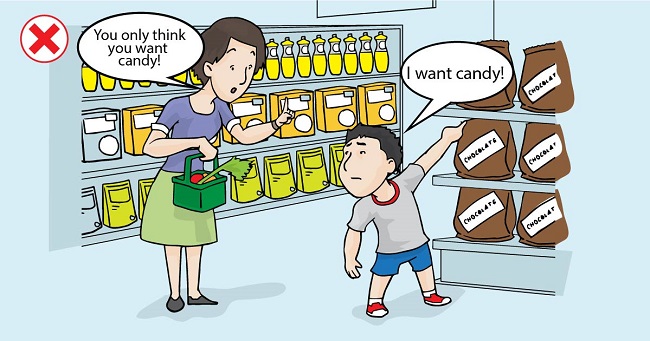 A better idea or approach would be to explain to children what they really need and what they don’t. When a child asks you for something, before refusing flatly, find out whether it is a necessity which it most probably may turn out to be. There is no harm in occasionally buying a product that may have caught your child’s eye if it isn’t too expensive. 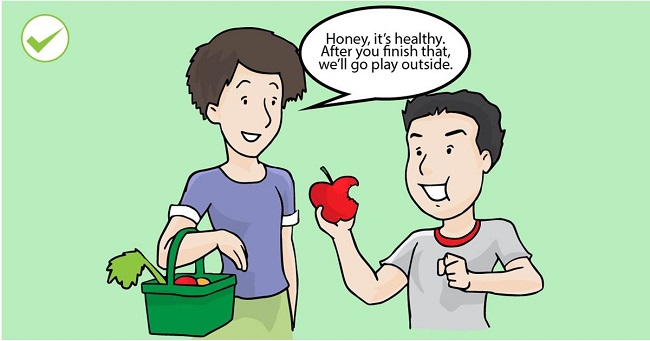 
4Assisting your kids in every little thing

There are many parents who can’t stop taking over their children’s school projects or even their homework. This prevents a child from absorbing intelligence and also understanding the repercussions or results good or bad of any given situation. By doing so you have prevented your child from assessing negative situations and valuing positive results from work well done. Your child learns nothing.
Three-year-olds in fact, can even put on their own shoes, take out their clothes and wear them, but what some parents end up doing is dressing the child until they are to be married. 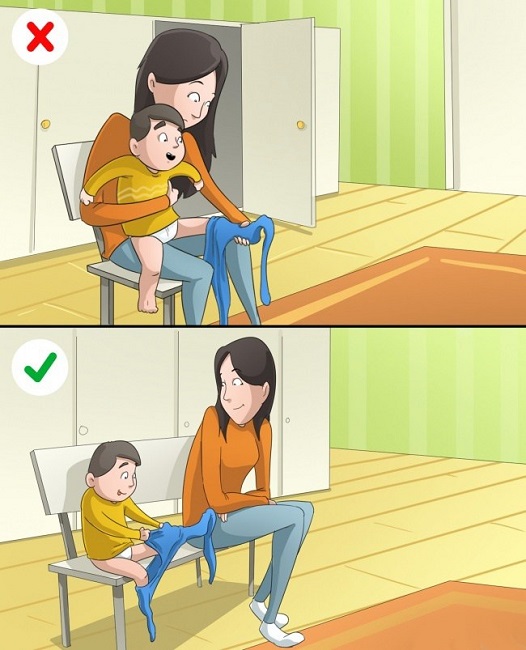 This is more or less an extension of point 1 where many parents force their children into liking the things according to their set of beliefs and likes. You want your kid to grow up to be a unique individual and not a clone of yourself. Instead of telling your kids what to like, you should ask them. Not doing so can confuse kids making them grow up with a conflict of opinions and indecisive adults. 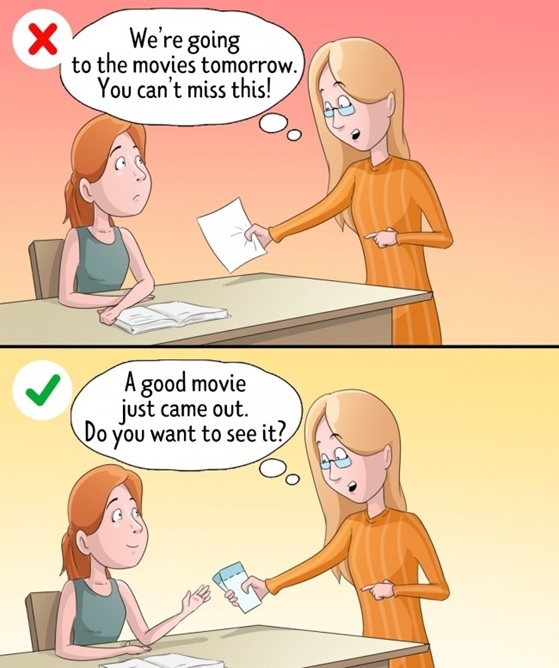 6Telling them to spend money your way

Stop telling your kids how to spend their money. Now this, of course, is an assumption that you aren’t a millionaire a spoiling your kids with huge sums of money to buy lavish stuff which of course is bad. By giving child pocket money it doesn’t mean you have to make him abide by rules in spending it, although of course, you should make him aware n the horrors of drugs etc.
A child will grow into an adult one day and as long as you give him limited sums of pocket money, it won’t do any harm in allowing them to spend it in a way they see fit because once they do start earning money as adults, they will eventually value it.
By preventing them from spending their money, a child then begins to question priorities and if there isn’t any positive responses or rewards, then they will wonder the point of saving at all. Allow a kid to save or spend their money as he sees fit. A little bit of responsibility and leeway may result in positive behavior. What you could do of course is buy him a piggy bank, educate them on the way to save money and let him take the decision after that. 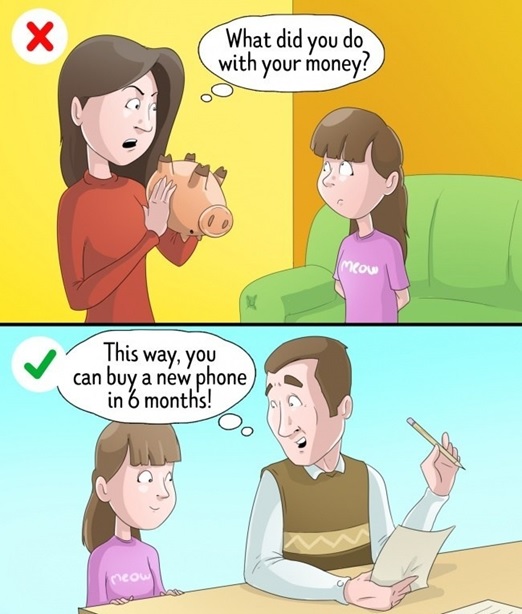 This is one classic mistake that many parents make and that is to impose their own likes, sports and hobbies down their children’s throats just because the liked it. If you love fishing, it doesn’t mean you kid will. Allow your kids to choose the hobbies, organizations and sports they want to take part n. of course if you want him to get interested in your sport or hobbies, then speaking about it to see if your child takes interest is a start. Moreover, it is always advisable to encourage your child‘s choice of hobby and sport too. 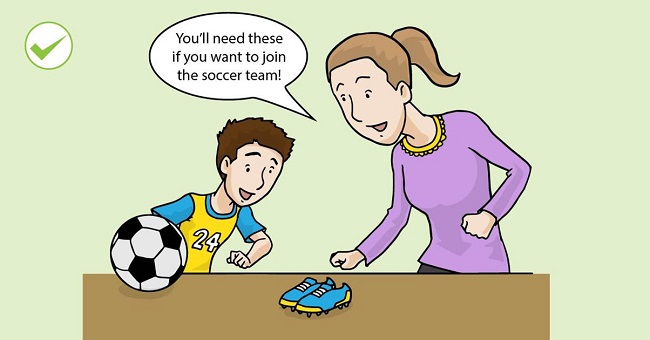 
8Take credit for their success

This mistake by parents goes on a lot. It is also every visible concerning performance like examinations or recitals, dancing classes etc. when a child doesn’t do as well as expected in class, there isn’t much encouragement or motivation to do better, but when a child excels in something, it is always the parent beaming and boasting as if they have achieved the feat. It is your child’s success and his moment. Give him that and his credit due to him. If you need to boast, boast about him not about how you influenced or helped him achieve this.
Don’t take away your child’s achievements and successes. Give credit where credit is due because your child needs to learn the value of recognition for hard work. 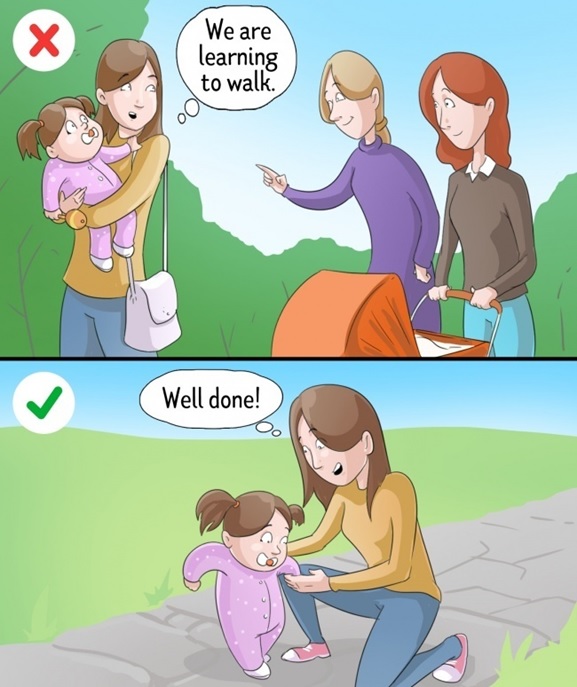 Like spending money, there are several parents with the bad habit of instructing relatives and frie4nds what t get their children for birthdays and festive occasions. Why do that?? Either let the kid choose if he is asked or allow the surprise but stop trying to control everything. 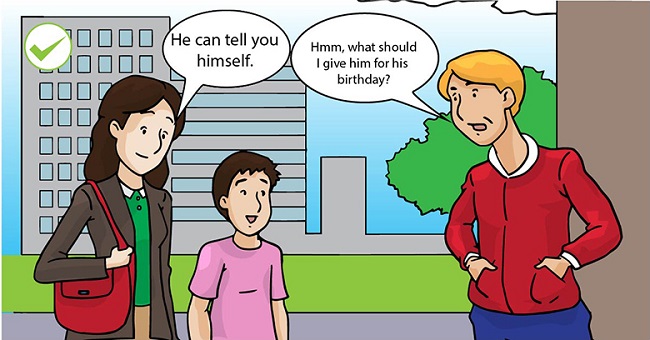 10Interfere in their personal lives

This applies a lot to teenagers who dislike parents poking their nose into their personal lives. Given the fact that you don’t want your child to get hurt and make mistakes but unless they don’t make mistakes, how do they learn? Prying into your teenager's affairs like a breakup of a relationship may make the kid less likely to talk to you. It just makes you look like a nasty parent. But!! If you act wisely, your kid will see you as a source of comfort and may even open up to you, that’s the time to do the talking and advising in a constructive way but without blaming the child for the mistake. You could use the opportunity to provide information and speak form your own experiences. 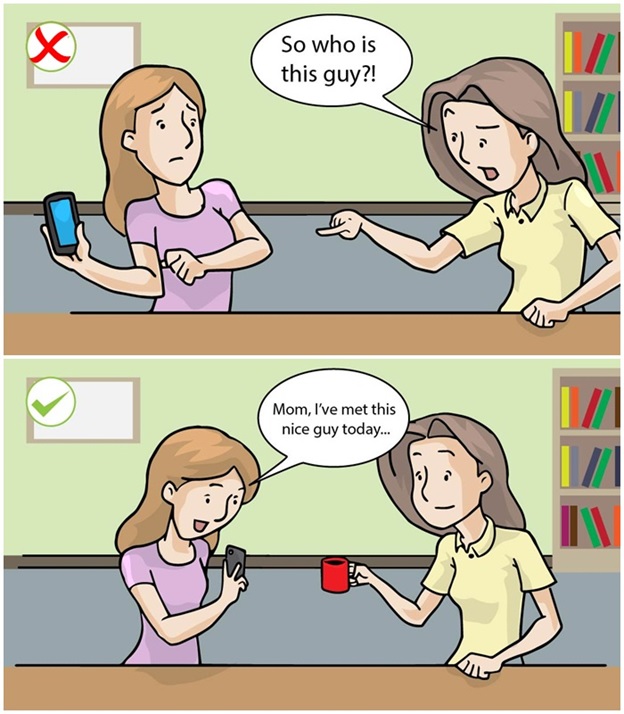 
11Telling your kids what to wear

Choosing your kid's clothes is a big No-No because then you will be faced with an all-out rebellion. Kids today are well informed about fashion trends and unless your kid isn’t someone who dresses bizarrely, allow them to have the benefit of choosing their clothes as an expression of their personality and style.

12Scolding a child in public

Among things parents shouldn’t do, this is perhaps the worst offense any parent can make consciously or subconsciously. The fact is that many parents think nothing of chiding or rebuking kids in public thinking that it’s a kid and you are the parent. Please understand that you are in public and children from the age of reason to grown-up kids all have a sense of dignity and can be totally offended when scolded and rebuked in public.
You can never be a perfect parent and the biggest contradiction of parenting is that mistakes are often made out of a parents love for children. The art of parenting is to practice patience and never see everything from your perspective or when you were a kid. Practice fairness and firmness when the time is right. Be a pillar of support to your child just like a stationary pillar which never asks to be grabbed but yet people come and grab it anyways when needed. In the same way, your child will reach out to you too because even though they may not communicate with you, they do love you and see you as the most trusted figure of security in their lives. 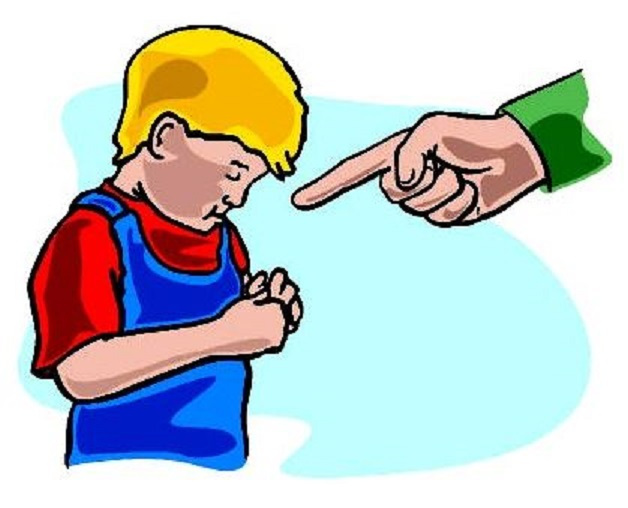 By Michael - October 16, 2018
Email ThisBlogThis!Share to TwitterShare to FacebookShare to Pinterest
Labels: parenting