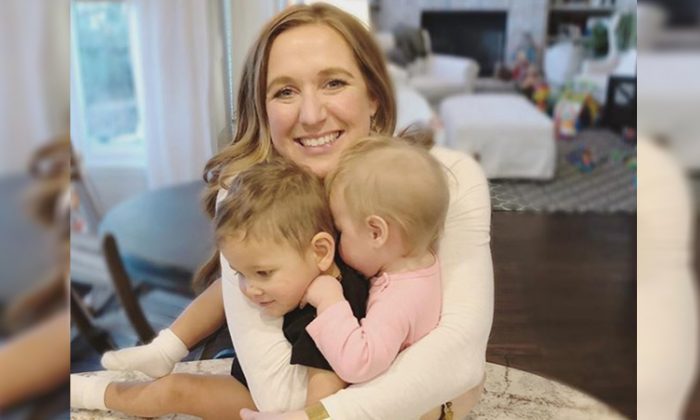 By Louise Bevan
April 12, 2019 Updated: April 12, 2019
Imagine the scenario: two children, lovingly adopted one year apart, are discovered to be related to each other. Astoundingly, this happened to single mom Katie Page from Colorado.

In her early 30s, Katie found herself divorced and wanting to make a significant change in her life. Moving house and changing jobs brought a new perspective, but Katie was drawn to the idea of fostering children. A meeting about foster care at her local church pulled at her heartstrings and convinced her it was the right path to take.
Katie bravely filled out an application in 2015 and changed the course of her life forever.

It was only a year later that Katie realized she wanted to be able to offer a child a “forever home” through adoption. Soon after, she was united with an abandoned 4-day-old baby boy who’d had a traumatic start in life. Named “Grayson,” the baby stayed with Katie for 11 months while care workers searched for his biological parents.
Sharing her story on Love What Matters, Katie recalled: “The information left at the hospital never led to anyone. No one came in search of the baby. Part of me was relieved that no one came forward so that he would be mine forever with no opposition. But there was always a pit in my stomach about one day having to tell my son that nobody showed up. No one came looking.”
Getting the loving home he truly deserved, Grayson became Katie’s legal son at 11 months old.

However, Katie’s new family was not to remain small for long. Only days after Grayson’s adoption, Katie received a call about an “emergency placement” from her case worker. A 4-day-old baby girl with a similar story had been left abandoned at the same hospital, and urgently needed care. Katie was overwhelmed but full of desire to help, and hours later, the little girl was in her arms.
However, something was odd: the first name of the mother written on the baby’s identity band matched the name Grayson’s mother had given to the hospital. “That’s funny!” Katie exclaimed.

Further investigation confirmed that not only was the mother’s name the same, but her date of birth matched, too. Coincidence?
The possibility that both children had the same mother was too extraordinary to resist. Frantically messaging her case worker, Katie managed to negotiate her way into a meeting with the baby girl’s biological mother.


Katie knew immediately that she was looking at Grayson’s real mother, too, especially when the woman admitted that she’d given up another child before the baby girl in Katie’s arms. Katie and her case worker could not help but come to the same conclusion: the children were siblings!
They had triumphant closure on their investigation when they were allowed to see that the surname on the birth records of both babies was the same.

Katie was taken aback by a hundred “What If?” questions: “What if I had said no?” she wrote. “What if Baby Girl had gone to another family? The connection would have never been made!”
On Dec. 28, 2018, baby Hannah was officially adopted, the missing piece in a most miraculous family puzzle. To add an epilogue to this extraordinary story, Katie plans to finalize the adoption of a third baby boy in 2019, the third child of Grayson and Hannah’s biological mother, who will complete their beautiful family.
Katie’s loving heart and open mind have reunited three children in the forever home they deserve.