5,000 People Stand in Rain for Hours to See if Stem Cells Match for 5-Year-Old Battling Cancer 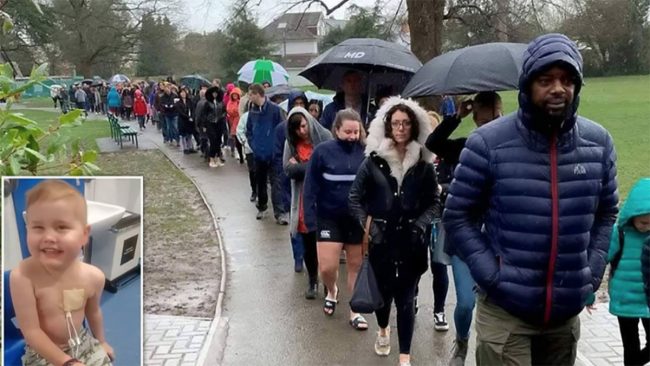 Event organizers were shocked by the sight of more than 5,000 people waiting to check if they were eligible to be stem cell donors for a five-year-old cancer patient, Oscar Saxelby-Lee.  In December, the child was diagnosed with a rare form of cancer, called T-cell acute lymphoblastic leukemia.
It is an aggressive type of leukemia that causes the bone marrow to release immature white blood cells, and the treatment requires a stem cell transplant within three months time.
Oscar’s teaching assistant Laura Senter, 22, said his diagnosis shocked the entire class as his illness developed fast, and she couldn’t even believe it. She said that the entire story was heart-breaking, so they have gone into action mode to try and find a donor.
His primary school in Worcester, England, organized the event, and Sue Bladen, the business manager said that they decided to do whatever it takes to find a donor.
His teacher, Sarah Keating, said that this was the first time a child went through something like this in her 20-year teaching career. Yet, she again stated that they were determined to fight it.
The crowdfunding page was started in February, and anyone aged 17 to 55 could register as a donor.  The school and Oscar’s parents raised about $11,300, which was much more than they dreamed of.
The event was run by more than 200 volunteers and on the first day, more than 1,800 people showed up to register as potential donors. The next day, over 3,000 people showed up, setting a record for the most people to ever volunteer as stem cell donors.
Ms. Bladen said that nobody moaned, even though they queued around the block, in the pouring rain. The spirit and generosity of people were incredible.
After the event, a thousand more people registered to be potential donors online
Now, it will take about six weeks to determine whether or not any of the potential donors are an eligible match for stem cell transplant, as Lisa Nugent, the head of donor recruitment explains that it is very difficult to find someone who is a suitable match because there are 17,000 HLA characteristics that need to be investigated.
Yet, Oscar is now in the care of doctors at Birmingham Children’s Hospital, and has already undergone 20 blood transfusions and a month of chemotherapy.
His mother reminded that this fun, loving, energetic five-year-old boy deserves to live to the fullest, alongside the other troopers fighting such horrific diseases. He needs to enjoy a normal and simple life, and he now needs someone else to save him.
Source: realfarmacy.com
By Michael - April 28, 2019
Email ThisBlogThis!Share to TwitterShare to FacebookShare to Pinterest
Labels: Life