Baby Found in Oregon Woods Had Meth in His System, Injuries: Officials 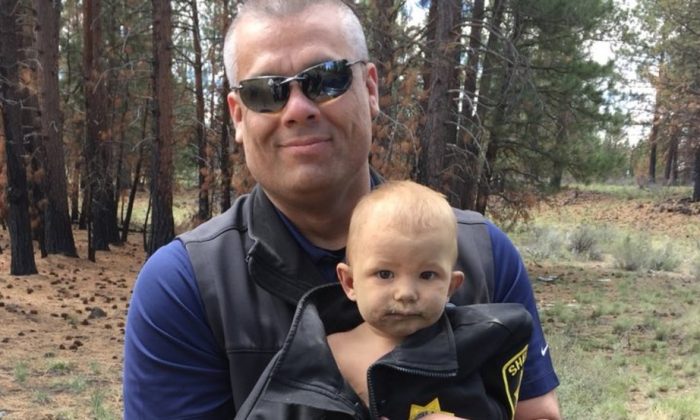 Adler denied Blouin’s request before increasing his bond from $200,000 to $500,000, the figure sought by prosecutors. They also ruled Blouin’s grandparents wouldn’t get back the $2,500 they put up to release him from jail back in July.
In July, the man left Oregon and went back to Ohio to live with his grandparents and his 4-year-old daughter.
“This is one of the most blatant violations of a release agreement I’ve seen,” Adler said of the case.


Details of the Case

In May, a Deschutes County detective found the child naked, apparently left alone hours in the forest near Bend, KOMO reported. Investigators later learned Bradley was taken from his legal guardian in West Virginia.
Blouin and the child’s 18-year-old mother allegedly drove across the United States and lived in a vehicle near Bend. The mother walked away at one point before Blouin apparently went to go look for her, KOMO reported.
During the search, he set down the child and left him there, officers said.
Officers then began a search for Bradley on horseback. They also used helicopters and drones.
An officer located Bradley about one mile from Blouin’s vehicle. He was then rushed to a nearby hospital.
The 18-year-old mother identified as the suspect’s former girlfriend, Katelin Dawn Jordan, by the Bend Bulletin.
But Blouin told the Bulletin that a group of men and a woman chased him with firearms and machetes, explaining that he put his son on the ground to draw the group away from the boy.
Jordan, meanwhile, stated Blouin violated a protective order and took their son and forced her to accompany them while trying to evade law enforcement. Jordan said Blouin beat her on the night when she walked away from the vehicle and wouldn’t let her take the child.
“When he was discovered naked in the brush, he had a broken leg, skull fractures and meth was found in his system,” stated prosecutor Van McIver. He said Blouin has committed violent crimes since 2009.
But, according to McIver, Jordan “appeared to be under the influence of meth.” She wasn’t charged in the incident, the Bulletin reported.
Blouin’s attorney, Karla Nash, said he believed he was being followed that night and had met people several days before at a camp. Blouin then allegedly sold them some items, including a trailer.


The very fabric of America is under attack ...